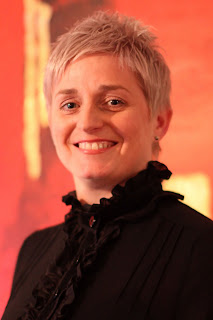 WHEN professional businesswoman and mum-of-three Cathryn O’Grady took redundancy from her job in November 2008 she set her sights on something she had been ‘threatening to do for years’ and started up her own business.

As an Events & Communications Specialist, since becoming self-employed, Cathryn has already organised a number of high profile events across the region and is confident of her ability to succeed as an entrepreneur.

“With more than 15 years experience in the industry I knew I could make it on my own” said Cathryn, “it was just difficult taking the plunge and actually making that first step.”

But 40-year-old Cathryn, who has three year old twin boys and a one year old baby boy, knew it was the right decision to make.

She said: “When I was working in Manchester I was travelling up and down the M6 and doing 12 hour days, and seeing my kids only to put them to bed. As a working mum it is extremely difficult to get the balance right, but now that I work for myself all that has changed and it is so much more flexible.”

Cathryn worked for the most part of her career for Trinity Mirror starting off in newspaper sales before working her way up to Regional Head of Sponsorship, Events & Exhibitions, where she organised and developed a number of large scale corporate and consumer events. She later moved on to work for an events agency in Manchester as Operations Director.

And, having built up a good name and reputation for herself Cathryn found the transition of being employed to becoming self employed far easier than she thought it would be.

“Luckily for me” continued Cathryn, “I had built up a great deal of contacts over the years and this made it much easier when setting out on my own. I got work straight away off my own reputation and have already organised events for a number of prestigious companies and charities across the region.

“All of this work has given me a fantastic start to the business and has also triggered a number of collaborations with contacts I have established over the years, which will enable me to secure work that wouldn’t have been open to me on my own due to having only just set up in business.”

Cathryn, who now lives in Burscough, has set up her business in the North Liverpool area and as well as receiving help and advice from women’s enterprise agency Train 2000, she has also benefited from the Stepclever programme. Cathryn received a grant from Stepclever which she used to help fund office equipment and also to develop a strong brand for her business, as well as stationery, a website and a marketing campaign which will allow her to compete for tenders on a larger scale both inside and outside of the region.

She said: “The support I have received from both Train 2000 and Stepclever has been excellent and being awarded the Stepclever grant has really helped me in these initial stages.”

As a confident entrepreneur, Cathryn undertakes a great deal of networking and socialising and is always looking for opportunities to meet new contacts and develop business relationships. But, she recognises that as a woman in business this can be extremely daunting.

“There are so many barriers that women face when they become self-employed” said Cathryn, “and for many women I think the biggest barrier is confidence. I consider myself to be an extremely confident person, but even now when I go to a networking event I can still feel a little uneasy about it and can see how for some women this would be completely daunting, it is always easier to go with other people first.”

Cathryn believes that other barriers faced by women include accessing financial support and managing a family round having a career.

“Despite the barriers” continued Cathryn, “there are so many positives about becoming self-employed and I would certainly urge any other women who are thinking about it, to have a go.”

It is early days for Cathryn’s business but already she has big plans for the future. She said “I am making more and more contacts all the time and am really getting my name about. I plan to continue to work collaboratively but am also very keen to develop more of my own projects, so watch this space.”

“I have massive plans for the future, but for now I am thoroughly enjoying my work and am so glad I took the decision to become self-employed.”

If you need support with project or events management and would like to find out more about the work undertaken by Cathryn O’Grady please contact her on 07918174176 or email cath@eventfulonline.com

And if you are a woman from the Stockport or Merseyside area who is interested in starting up your own business please contact Train 2000 on 0151 236 6601.
Posted by The Women's Organisation at 4:27 AM No comments: 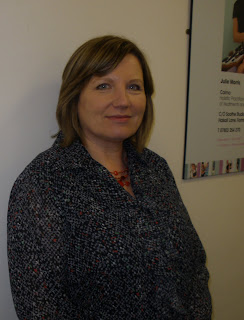 "I have felt very welcomed and for sure want to come back" said Dr Isolde Anderson following her research visit with Train 2000.

Isolde whose research interests include organisational culture and leadership has been visiting Liverpool Hope University from Hope College in Michigan in the US. She came to Train 2000 to learn more about how the organisation operates, and to see what the "personality" of the company was.

Isolde commented:
"I have always performed cultural analysis on organisation I was a part of, so I was interested to be an 'outsider' looking in."

When asked what her impression of Train 2000 was Isolde said
"Without giving away too much of my reserch at this point, I would say Train 2000 is an organisation that empowers women - not only by the services offered, but through the way those services are delivered in supportive and consistant way."

During Dr. Anderson's final day with Train 2000 on Wednesday 24th March 2010 we asked her what she would take away from her experience.
"I think it would have to be the importance of feminism, whether you idetify it as 'the F word' or not. Women are powerful and can be empowered with the right support."

Referring to how the staff team works together Isolde said
"There is a real female way of caring for one another shown here - not in an unprofessional way, it's through sharing."

Train 2000 look forward to the final report from Dr Anderson's research which she referred to as "uncooked porridge" at this point. Her hopes were that her "notes will become insights to share and use once cooked".
Posted by The Women's Organisation at 4:35 AM No comments: 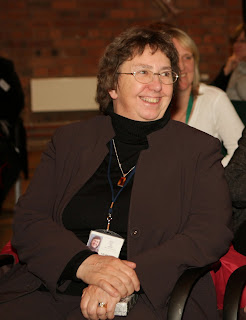 "We will make the rest of the world sit up and take notice of what women can, should and will achieve" said Councillor Flo Clucas OBE as she was inaugurated as the first President of WICED (the Women's International Centre for Economic Development in Liverpool).

Chair of the board for WICED Alison Price commented that she was "proud and delighted" to inaugurate Councillor Flo Clucas and praised her for her continued support and hard work on women's enterprise.

Held at the Novas Contemporary Urban Centre the lecture was attended by local council members, leading local enterprise initiatives, representatives from the Universities, and female entrepreneurs.

Following on from Councillor Clucas' moving speech where she told the attendees
"As women we are making a statement about what we want other women to be able to do"
Professor Henry gave an insight into ways to help women to overcome the barriers that prevent them from making their dreams a reality.

Making it clear that she believes in empowering women to believe in their own ability, Professor Henry also added that it is essential to
"give women a realistic picture of their journey to where they want to be. It won't be easy, but with the right support they CAN do it".

To keep informed of the developments with WICED follow this link. And to see more photographs from the event check out our flickr album.

Posted by The Women's Organisation at 6:42 AM No comments: 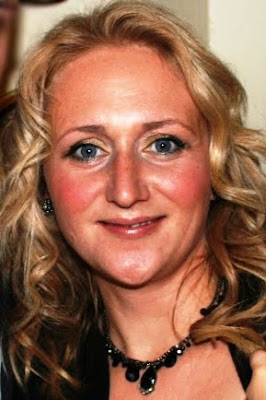 AFTER being on maternity leave with her second child Stockport mum and fashion designer Tracey Shahlavi decided she no longer wanted to return to work – but instead set her sights on becoming her own boss.

And, in September 2009 she did just this, when she opened up Serenity Co a fashion design consultancy.

“This is something I have always wanted to do” said Tracey, who has worked in the fashion industry for more than ten years, “when I went back to work after having my first child it was very difficult leaving her and I didn’t want to do it again, so becoming a mum for the second time gave me that final push I needed.”

Since launching Serenity Co Tracey has secured her first client and business is building all the time.

Having originally undertaken a Fine Arts Degree at the Cumbria College of Art & Design in Carlisle Tracey went on to train as a fashion designer and since then she has been involved in designing high street fashion collections for retailers such as Top Shop and Debenhams.

As well as working on a consultancy or freelance basis designing fashion collections for other companies Tracey is also looking at developing her own range of bridal products and is currently in talks with three factories in China who will work on the manufacturing side of the business with her.

“Self-employment really is the ideal solution for me as in the fashion industry you have to work very long hours but now I can plan my work round family life.”

Tracey recently designed some clothing for an outlet based in the Trafford Centre and said it was a great feeling to see her designs in the window. She added: “It was a really good feeling and it meant so much more because I am working for myself and not somebody else. When you make your own money you really feel proud of your achievements.”

After taking the decision to become her own boss Tracey made contact with women’s enterprise agency Train 2000 which has been contracted through Stockport Council with Stockport Boost to deliver business support that is specific to the needs of women.

Since then Tracey has worked on a one-to-one basis with a business adviser to develop her business plan and launch Serenity Co – services which have been delivered free of charge to Tracey under the Intensive Start-Up Support (ISUS) contract.

“The support I received from Train 2000 was fantastic” said Tracey, “I worked with my adviser Mike Marsden to develop a comprehensive business plan which really gave me the confidence to move forward. I had never done anything like this before but Train 2000 really supported me through this process so that it didn’t seem to daunting.

“I also accessed a marketing workshop through Train 2000 which gave me ideas about how to promote my business and the best way to use the internet and develop my own website. It’s really good to know that there is an organisation there who can offer me the advice and support I need.”

To find out more about Serenity Co visit www.serenityco.co.uk or contact Tracey on 0161 486 0551, and for more information on the free business support you can receive from Train 2000 click here.
Posted by The Women's Organisation at 5:33 AM No comments: