It is our absolute pleasure to announce that our Senior Marketing Executive Lucy Cashman as been selected to be added to the 2020 Northern Power Women - Future List.

The list was compiled through process of open nomination, and selection by a panel of judges, It recognises change makers disruptors and trail blazers who are making a difference supporting the Northern Power Women mission of accelerating gender equality from the North.

Lucy, 25, is already amplifying the discussion around gender equality and promoting the achievements and voices of women everywhere overseeing brand communications for The Women's Organisation. Making a name for herself as a 'twitter influencer' Lucy's posts reached over 3.6mil twitter contacts with messages around empowering women in Dec 2019 alone.

Also responsible for curating a calendar of events for the organisation, Lucy is creating a platform for women in leadership roles to highlight their impact in business and communities, and more generally for women to develop their skills and ambition. An example of these is ‘Women Who Lead’ at Museum of Liverpool held in September of last year which saw over 150 attendees eager to hear women’s stories of success. That same day, #WomenWhoLead was the top trend on Twitter in Liverpool.

Recognising her potential Lucy was also invited on an ‘Aspiring Young Women Leaders’ trip to Brussels last year to visit European Parliament and meet with female MEPs and EU leaders from across Europe to discuss how we can support more northern women into political roles.

Speaking about her achievements Lucy reflected "As well as coverage from a number of high-profile news outlets including Guardian, The Pool, BBC News and more, I am most proud of organising a live interview with CEO of The Women’s Organisation Maggie O’Carroll on BBC World (the world’s largest international broadcaster reaching 210 million per week), discussing the need for female-focussed business support and talking women in business on a global platform. What a difference an intervention like that can make for the equality agenda."

NPW say "It is critical that women figure in key decisions and thinking when talking about the Northern Powerhouse. If we are to balance the economy and realise the true potential of the north we need to promote the women who are involved across all of our sectors."

The list announced on 22 January 2019 will be celebrated at the fifth Northern Power Women Awards on the evening of the awards, 16 March 2020 at Manchester Central Convention Complex.  If you would like to attend please book your tickets here

Lucy was also chosen recently as one the Liverpool Echo's '30 Under 30'. 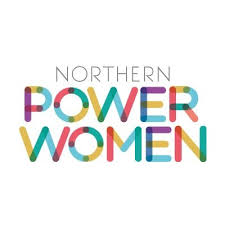 Posted by The Women's Organisation at 1:30 AM